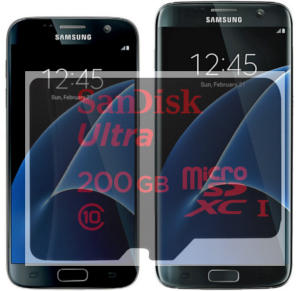 Why micro SD card support is still relevant and important?

Android system and the essential apps take about 4-5GB storage. Vendors may pre-install their own apps and some bloatware. These apps usually consume about 1-4 GB storage.

So, among the 32GB storage, owners can use about 23-27 GB depending on your region and your carrier. This is actually sufficient for at least 80% smartphone users.

It is more or less a psychological demand, not a real (physical) demand.

But do not overlook such a psychological need. This can be one of the decisive factors when purchasing smartphones.

Apple successfully exploits such psychological demands with iPhone 6 and 6s storage configurations. They managed to sell more 64GB iPhones to buyers who initially may only budget for a 16GB iPhone.

But for Samsung Galaxy S6, the 32GB model is still the most popular model. Actually, some distributors even do not renew the 64GB inventory at all because of the weak demands.

Samsung is not Apple.

If you are a iPhone user, you have no choice: get it or forget it.

However, for Samsung smrtphone users, if you want a SD card slot (although you may never use it), you have many other alternatives: LG, Motorola, Huaiwei and may other vendors are waving their Android phones with a micro SD card slot.

Samsung does have a valid reason for removing micro SD card support in Galaxy S6 (and Galaxy Note 5):  performance.

When you transfer files or update Google apps, you will find out that Galaxy S6 is significantly faster than any other Android phones if your network connection is good.

For file transfer, Galaxy S6 and Galaxy Note 5  are both significantly faster than any iPhones.

In addition, you may notice many new phones were fast when you bought them. But it becomes slower and slower gradually. This did NOT happen to Galaxy S6 or Galaxy Note 5.

UFS 2.0 in Galaxy S6 is about 3 times faster than the latest eMMC 5.1 storage.  You can imagine the difference as that between SSD and your old mechanical hard drive.

In addition, UFS 2.0 uses less power for the same workload.

So, if you mix the usage of micro SD card and UFS 2.0 storage, you will not feel the speed improvement  of UFS 2.0.

This is probably one of Samsung’s justifications of removing SD card support in Galaxy S6, S6 edge, S6 edge+ and Galaxy Note 5.

But some long-term Samsung customers apparently are not ready to accept this (although they probably will never use the SD card even if SD card support was offered in S6).

Please note, non-removable glass back is never the cause of removing SD card support in Galaxy S6. SD card can use the SIM card try or separate SD card slot/tray in any sides of Galaxy S6.

Storage is always a big concern for budget and middle-range mobile phones. 8GB or even 4GB internal storage can always be a headache if you cannot expand it easily.

As mentioned, this is sometimes a psychological need, not a practical requirement.

Anyway, for Galaxy S7, Galaxy S6 and most other Galaxy devices , USB OTG is supported. You can easily hook a USB OTG drive (or a less-than-$10 USB OTG cable + normal portable drive or thumb drive) and enjoy the expanded storage for media files.

Actually, USB OTG is supported by Android by default unless vendors choose to disable it. Of course, USB OTG support depends on the drivers in the firmware.  You may find some USB OTG devices may not work on your phone.

Of course, USB OTG storage is mainly for your media files. You cannot use it as internal storage. You cannot install apps to it. You also cannot save camera photos to it automatically.

First, there is no reason for Samsung to disappoint some potential buyers by committing such a feature. Sales of Galaxy S6 and Galaxy Note 5 should tell the story loudly enough.

Adding micro SD card support does not increase the complexity of design or manufacturing.

Although Google designed this SD feature targeting at budget and middle-range phones with 8GB or less storage, some Galaxy S7 may owners will very likely take advantage of it (at the price of performance).