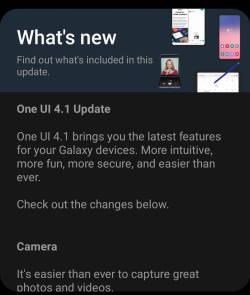 A green dot will appear in the upper right corner of the screen (status bar) when an app is using the camera or microphone.

You can also use quick setting buttons to temporarily block all apps from using the camera or microphone.

The camera and microphone indicator is one of the most practical new features in Android 12 update for Galaxy S21, S20 and S10. It is actually a native feature in Android 12, as explained here.

To be precise, when the camera (for example, open the Camera app) or microphone is accessed, a camera icon (or a microphone icon) will be shown briefly. The icon then changes to a green dot, as explained here.  The following figure illustrates this change.

We also updated the Master Meaning of Galaxy S21 Status Icons and Notification Icons page with the new icons.

Smart Switch is the best tool to migrate data from your old phone to a Galaxy phone. For example, it is very easy to transfer most data from your previous phone to Galaxy S21.

With the release of the Galaxy S22, Samsung further improved the Smart Switch app and added some new features. These new features were ported to the One UI 4.1 update for Galaxy S21, S20, and S10.

With the One UI 4.1 update, you now have 3 options when transferring content to your new Galaxy devices:

Of course, the simplest way to migrate data from your previous phone to Galaxy S21 is still through a USB cable.

3. Voice memo on the lock screen

Samsung revamped the faceWidgets for the lock screen in the Android 11 (One UI 3) update and rebranded them as lock screen widgets.

In One UI 4.0, Samsung redesigned the widgets on the lock screen and added the voice memo widget so that you can record voice memos without unlocking your phone.

For example, as shown in the screenshot below, you can tap the shutter button to record a voice memo on the Galaxy S21 lock screen. 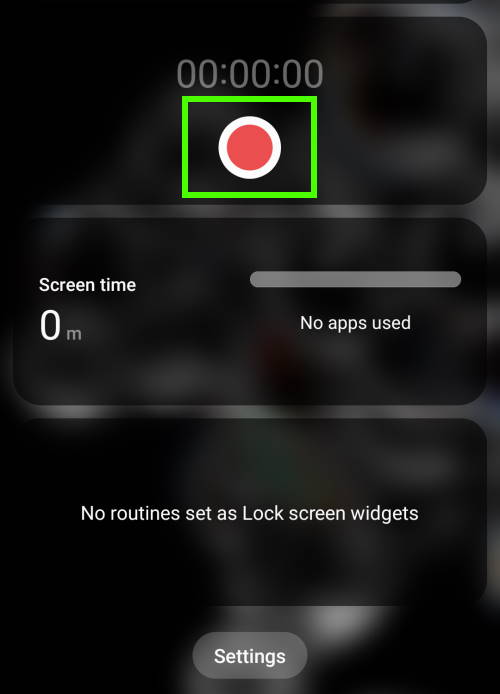 Please note, if you reboot Galaxy S21 (or S20 and S10), you can not access the lock screen widgets immediately. You need to unlock the phone at least once before you can access the voice memo and other widgets.

Sometimes, you may feel the screen is too bright, even at the lowest brightness setting, especially when adaptive brightness is on.  Now, you have the quick setting button to turn on the Extra dim for more comfortable reading in the dark.

You can also customise the Extra dim, for example, adjusting the intensity, adding a shortcut in the navigation bar, or turning off the feature after a reboot., as shown in the screenshot below. 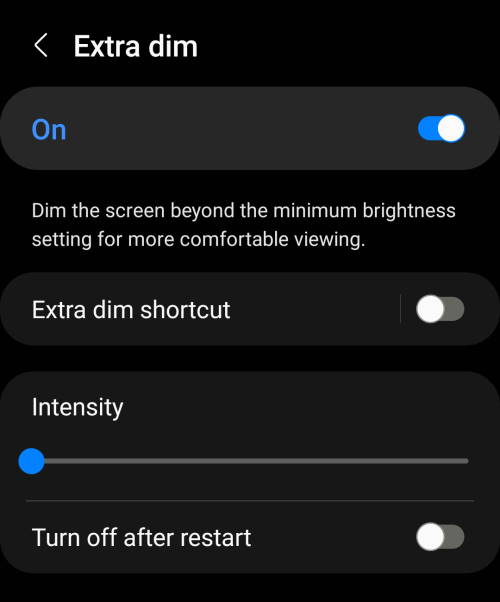 How Extra Dim works is explained here. The detailed guide for using Extra Dim on Galaxy S10, S20, S21, and S22 can be found here.

Grammarly is a popular writing assistant (far more than spelling correction in most keyboard apps) with both free and premium plans. The official Grammar Keyboard actually works well on most Android devices.

But Samsung Keyboard surely offers tons of additional cool features. So, Grammar Keyboard users no longer need to switch keyboards on Galaxy S22, S21, and S10. You can use some Grammarly premium features directly on Samsung Keyboard.

You just need to accept the terms and are ready to use the Writing assistant without installing anything. Please follow this guide on how to enable and use Writing Assistant on Samsung Keyboard on Galaxy S22, S21, S20, and S10 with Android 12.

When you run an app on your Galaxy S21, the app must be loaded from the phone storage into the memory (RAM). CPU then executes commands from memory.

The fundamental differences between the RAM and phone storage include:

The RAM on all Galaxy S21 phones is generally sufficient for all apps in the Play store. So, you seldom encounter insufficient memory issues when using any apps.

But if the phone has more RAM, it can keep more previously opened apps in the memory. You will then be able to quickly switch (re-open) these apps.

RAM Plus essentially use part of the phone storage as “virtual” memory to extend the physical memory when the available physical RAM is low. Data in the virtual memory are ready for the CPU and can also be quickly moved to the physical RAM.

So, RAM Plus is designed for heavy users (mainly gamers). Some games may hog a few gigs of RAM. The system may force the phone to close some previously opened apps.  This may result in slow app switching.

Samsung induced the RAM Plus feature first on some middle-range phones because of the relatively low memory (4-6GB) on these phones.

In the One UI 4.1 update, RAM Plus was added. And you can also customise the size of the virtual memory from 2GB to 8GB (in Settings — Battery and Device care — Memory — RAM Plus), as shown in the screenshot below. 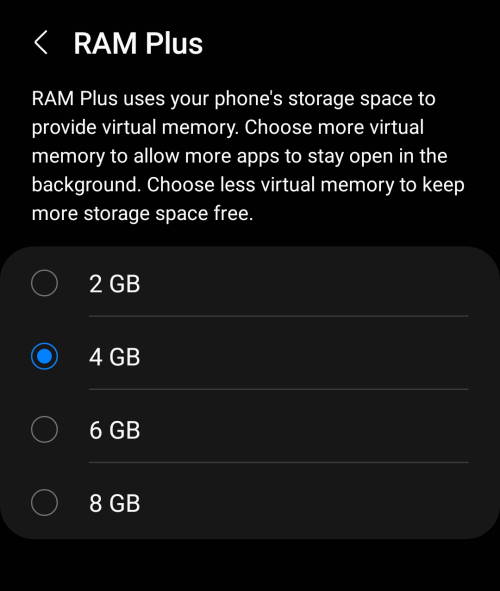 7. Skip an alarm just once

In one UI 4.0 update, Samsung added one of the long-anticipated new features letting you just skip an alarm just once.

You can turn off an alarm just for one occurrence. It will turn back on automatically after it’s skipped.

The feature sounds trivial. But somehow it has not been available on Android for a long time.

The portrait mode in the One UI 4.0 update also can recognize pets, in addition to human faces.

Currently, the portraits for pets feature work best with dogs and cats. You can apply some portrait effects to your pet after taking the picture.

Both the front and rear cameras can be used for portraits for pets photos.

Single-take camera mode was introduced in Galaxy S20 to automatically capture various photos and videos in up to 10 seconds. It was improved noticeably in Galaxy S21.

In the One UI 4.0 update for Galaxy S20 ann S21, you can add extra 5 seconds to capture a longer moment, as shown in the screenshot below. 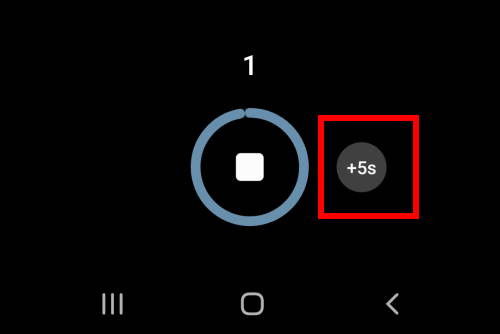 It’s also easier to customise what you want to capture in the new single-take camera mode, as explained here.

For Galaxy S10 and Galaxy S20, Scene Relighting, which is used to automatically create 24-hour time-lapse videos, was now ported in. Please check this guide on how to use Scene Relighting in the Gallery app or Single Take camera mode.

On Galaxy S10 and S10+ with the One UI 4.1 update, in addition to choosing to use the wide-angle or ultra-wide-angle camera lens,  you can use up to 10x zoom in the Pro and Pro video modes.

On Galaxy S20 and S21, you are allowed to choose to use the telephoto lens directly in the Pro and Pro video camera modes.

The Director’s View mode was introduced in Galaxy S21. The One UI 4.1 update lets you save your Director’s view videos with separate front and rear videos so you can edit them later, even after you finished recording.

When you play them back in the Samsung’s video player, you can switch between different views such as split-screen or picture-in-picture.

Of course, you need to export one of the views if you want to share the video with others or play the video on other devices.

The Director’s view is not available on Galaxy S20 and S10 even after you update them to Android 12 with One UI 4.1.  On Galaxy S20, the closest camera mode is the Dual recording.

Through One UI 4.0 and One UI 4.1 updates, some noteworthy features were added, including,

Please note a few other useful new features in Android 12 update for Galaxy S21, S20 and S10 were not discussed here, for example:

Do you have any questions about new features in Android 12 update for Galaxy S21, S20 and S10?

The community will help you.

If you have any questions about using Galaxy S21, you may check our detailed step-by-step Galaxy S21 guides:

The official Samsung Galaxy S21 user manual (PDF) in your local language can be read and downloaded here.

If you want, you can drop us an email on the contact us page.