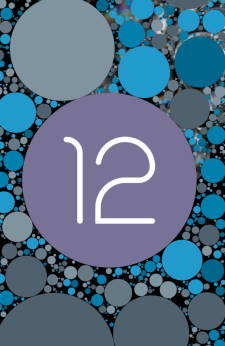 But there is still some confusion about the Android 12 update, One UI 4.0 update, and One UI 4.1 update.

As the Android 12 update is almost identical for Galaxy S21, S20, and S10, this guide applies to all these three phones.

What are the differences between the Android 12 update, One UI 4.0 update, and One UI 4.1 update?

Galaxy S21 was released with Android 11. So, Android 12 is the first major update for Galaxy S21. And it will expect to receive at least Android 13, Android 14 and maybe even Android 15 updates.

In comparison, Galaxy S20 was released with Android 10 and already received the Android 11 update. It will probably receive only 3 major updates. So, probably Galaxy S20 will end up with the coming Android 13 update in 2022/2023.

Samsung, as an Android vendor, always tweak the system and add some unique features to distinguish itself from the other Android vendors. Quite often, these unique value-added features can help maintain a substantial user base.

Instead of modifying the core of Android, Google actually encourages vendors to customise the UI and extend some features. In the past, most Android vendors differentiate from each other with their own “skins” and a few unique features.

TouchWiz, the UI (launcher) for Samsung’s Android phones, had been the iconic feature of Galaxy phones from 2010 (Galaxy S) to 2016 (Galaxy S7). The feature-packed (some were just half-baked, e.g., the new features in Galaxy S5) and overloaded UI was replaced with the Samsung Experiences in Galaxy S8. One UI is the latest Android UI for Galaxy phones. It was introduced with Galaxy S10 in 2019.

One UI is a “modern” Android skin (overlay). It is light and visually appealing.

Anyway, One UI and Android are actually two different things.  Technically, they can be separated.

However, some features in One UI depend on the Android core. So, Samsung needs to update the One UI for new versions of Android.

For the Android 12 update, Samsung released two One UI updates: one UI 4.0 update and One UI 4.1 update.

The existence of two versions of One UI for one version of Android is mainly due to the release cycle of Android and  Galaxy phones.

Google normally releases a new Android version in September or November. But Samsung usually releases new Galaxy S phones in the first quarter of the year. Of course, the latest Galaxy S is released with the latest Android.

For older phones, Samsung wants to update them to the latest Android before the new flagship is released. For example, Android 12 was released on October 4, 2021, and Galaxy S22 was announced on February 25, 2022. If Samsung had held the Android update for Galaxy S21 till March 2022, many owners would have complained about the slow update.

Surely, Samsung wants to keep some unique features for Galaxy S22 so that the Android update for existing phones does not hurt the new sales.

So, most Galaxy S21 owners received the Android 12 update with One UI 4.0 before the release of the Galaxy S22.  Galaxy S20 and S10 received a similar update later.

This Android update approach has worked really well since One UI 2. Owners of Samsung’s flagship phones can feel the value of the Samsung brand: the phone will not be outdated in the next 3 to 4 years. For example, Galaxy S21 now has almost all the features of the Galaxy S22, except a few hardware-limited features.

By default, Galaxy S21 (S20 and S10) checks the update periodically when the phone is online and idle.  Once the Android update, including the Android 12 update and monthly security updates, is available for your phone, a notification will be shown.  You can tap the notification to download and install the update.

If your Galaxy S21, S20 or S10 fails to check update automatically, you can manually check the available update.

In Galaxy S21 Settings,  tap Software update, as shown in the screenshot below.

On the Software update page, as shown in the screenshot above, tap Download and install.

Galaxy S21 (S20 or S10) will start to check whether there are any updates (including the Android 12 update) for your phone.

If the Android 12 update (or any security updates) is available, it will start to download.  You will see the download progress bar, as shown in the screenshot below.

Of course, you can pause the download and resume it later when needed.  The file size of the Android 12 is around 2GB. So it takes some time to download.

Please note downloading and installation of the Android 12 update are separate. You need to download it first.

Once the update is downloaded, you can choose:

Of course, you can do nothing now and decide later.

If you tap Install now, as shown above, the installation will start immediately. And you cannot interrupt it.

You also cannot use the phone before the installation is done. The whole updating process usually takes a few mins.

Initially, the phone unzips the downloaded package, as shown below.  Then it reboots to apply the update. 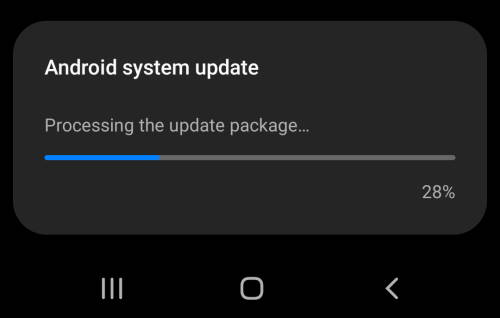 Anyway, you need to wait for the phone to reboot to the lock screen before you can use the phone.

Android 12 update needs to be “approved” by local carriers. This means the update is not available at the same time. Even in the same country, the Android 12 update may be delayed for a few carriers (although it has been less likely than before).

Also, Samsung rolls out Android updates in a stagged schedule. For example, the Android 12 (One UI 4.0) update for Galaxy S21  was first rolled out in a few countries in Europe in December 2021. It was later globally rolled out in most countries in Jan/February 2022.

So, in almost all regions, you should have received at least one Android 12 update (One UI 4.0).

Q3: Why my Galaxy S9 has not received the Android 12 update?

Samsung stopped updating Galaxy S9 (all models) in most regions. So, very likely, your Galaxy S9 should stop at Android 10 with One UI 2.5.

Q4: Is the Android 12 update rollout based on the origin of the phone or current carrier?

The availability of the Android 12 update is based on the origin of the phone, not the current carrier. For example, if you bought the phone in the UK, and used it in the US, then the update will follow the schedule in the UK.

Both updates are based on Android 12. One UI 4.1 update mainly added some features released with Galaxy S22.

If you have any questions about the Android 12 update for Galaxy S21, S20, and S10,  please let us know in the comments.

The community will help you.

If you have any questions about using Galaxy S21, you may check our detailed step-by-step Galaxy S21 guides:

The official Samsung Galaxy S21 user manual (PDF) in your local language can be read and downloaded here.

If you want, you can drop us an email on the contact us page.