We all hate app pushing pop up ads

As most of Galaxy S7 owners use a lot of free apps. We understand many app developers rely on ad revenue to pay their bills.

So, normally we can tolerate ads in apps without installing the ad blocker apps. Just FYI, some app blockers may replace original ads with their own ads. So these guys are using other developers’ work to earn money.

Anyway, the majority of Galaxy S7 owners may get angry when some apps push pop up ads which affect your phone usage unless you tap the ad or close the app.

Even worse, some nasty apps may push pop up ads when the app is NOT in use.  They deliberately to hide the app pushing pop up ads.

For example, as shown below, when I browsed my own website with Chrome browser, and suddenly, a pop up ads blocked my view as shown below.

I have no way to close this pop up ad. The X in the pop up ad actually direct me to Google Play store to install the poor app, or to some suspicious sites.

This is an example of malicious pop up ad. I believe most of us hate them.

I know I do not use such pop up ads in the website because this is our own website. I know the ad types and sources.

I know my ISP does not have such a shabby business.

Then where does this pop ads come?

So I decided to dig it further to find out the app pushing pop up ads. 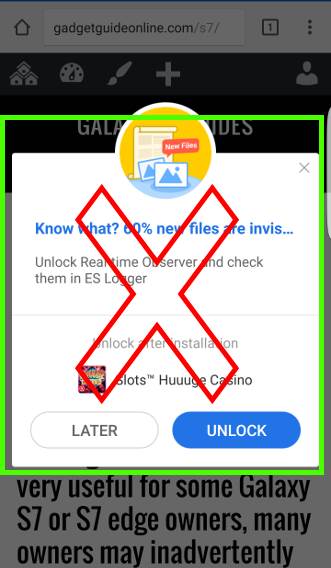 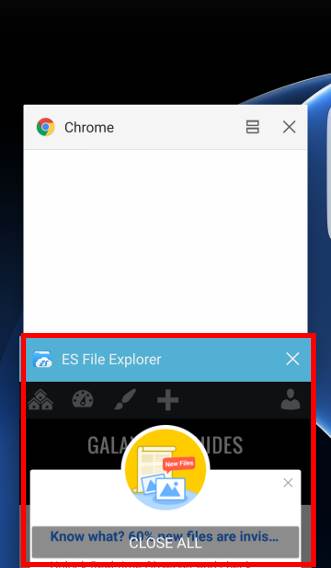 How to find out the app pushing pop up ads in Galaxy S7 and S7 edge?

Such ads do not show all times.  Sometimes, it shows once a day or twice a day or every the other day.

I know such nasty pop up ads are pushed by some apps installed on my Galaxy S7 edge.  But you do not know which one because the app developer deliberately tried to hide app.

Initially, I thought, it is through notification. So, I disabled notification for most suspicious apps.

But this does not solve the issue. A developer told me it is from a running service, not through notification system.

And my friend shared his method to find out the app pushing pop up ads in Galaxy S7 .

The method is simple.

Although the app developer is trying to hide the app, Android does not allow anonymous processes (screen re-draw).

So, once you get such a nasty pop up ad, tap the Recent button.

Yes, the actual app pushing pop up ads are shown in the list of recent apps.

As shown in the screenshot above, you can find the nasty app is ES file explorer! The app is trying to impersonate itself as Chrome browser!!  You now know how bad such developers are!!!!

ES file explorer used to be one of the best file explorer in Android. But now, it it time to uninstall it. Actually many users already shared their findings of the abnormal behavior of this app.

If you are curious, I am now using ASUS File explorer.  I don’t think ASUS would ever push such nasty pop up ads!

Please note, in my phone, the bad guy is ES File explorer as an example. In your phone, it could be some other apps.

Next time, when you get such pop up ads, tap Recent button to find out the app pushing pop up ads.

Can I stop such apps from pushing pop up ads?

First, such app developers are not trustworthy. You should uninstall the app immediately if possible because you don’t know how low they can go.

But if for whatever reasons, you cannot uninstall the app right now,  you may try to block it.

A developer reminded me it is possible for a criminal to bypass the permission.

So, the solution is still to uninstall the app.

Do you know how to find out the app pushing pop up ads in Galaxy S7 and S7 edge?

If you have any questions or encounter any problems to find out the app pushing pop up ads in Galaxy S7 and S7 edge, please let us know your questions or problems in the comment box below.

The community will try to help you.