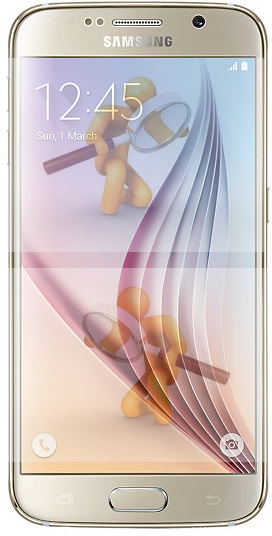 Samsung Galaxy S6 (and S6 edge) is a good, but not great smartphone.

Samsung Galaxy S6 and Galaxy S6 edge are the most beautiful smartphone Samsung has ever designed and manufactured.

The unibody metal design with Corning Gorilla Glass 4 in the back and front makes it standing out among 2015 flagship smartphones.

The curved edge screen in S6 edge makes it very unique, although some may complain on the usability and reduced strength due to the edge screens.

Samsung Galaxy S6 also boosts the performance through their own Exynos SoC, and new storage technology.

The camera in Galaxy S6 is fast and can take decent photos in auto mode.

But if you check the phone carefully, you will easily find the many Samsung Galaxy S6 defects that prevent it from being a great smartphone.

In this post, I share with you the top 6 Samsung Galaxy S6 defects based on my knowledge and hands-on experience.

I would list this as the No.1 Samsung Galaxy S6 defect.

I know many may disagree.

iPhone never has a removable battery.

HTC does not offer removable battery in recent years.

Recent Nexus devices do not have removable battery.  T

Removable battery still matters for Samsung Galaxy S6 for those:

In current smartphone market, only Apple is successful with non-removable battery due to its extensive service network.

Nexus users are feeling the pain  (except Nexus 6 users) now or have to throw away the device already.  HTC still has no idea why their sales are not proportional to positive reviews.

Samsung and LG used to be the two major smartphone manufactures that give owners the removable battery. And sometimes, this can be a deciding factor for conscious buyers.

Now Samsung decides to use a non-removable battery for Galaxy S6, and S6 edge.

LG is probably a better choice if removable battery matters for you.

Some owners do not understand why USB 3.0 is important for a smartphone, because most users never connect the phone to the PC and transfer large quantity of files.

If you have thousands of photos to be copied to a PC, or you want to copy a few Gigs movie files for your next trip, you will understand the importance of USB 3.0. With USB 2.0, very  frequently, you will get timeout errors and have to transfer again and again.

The only drawback of USB 3.0 is the port size is almost doubled compared to USB 2.0. And USB 3.,0 cable is usually a few percentage more expensive than USB 2.0’s. You can actually use USB 2.0 cables for USB 3.0 port.

Apparently, Samsung decides to cater Samsung Galaxy S6 (and S6 edge) for mass market and believes only a few owners need USB 3,0. They are probably correct. But for some, this can be a big disappointment, and a defect of Galaxy S6.

There are no other well-known smartphone vendors support  USB 3.0 yet. So, if you are looking for a smartphone with USB 3.0 support, forget it now.

Galaxy S5 is IP67 certified dust and water resistant. This is one of the most welcomed features in Galaxy S5 as explained in this post, although it is not on a par with Sony’s waterproof Xperia phones.

Nowadays, smartphone owners, especially young owners, do not take much care of the phone. Spilling coffees over phones is not news.

Unfortunately, Samsung Galaxy S6 is not water resistant, although the back cover is non-removable (by owner).

If you are looking for a smartphone with water resistant, Sony Xperia series should be your choice.

Samsung Galaxy S6 active? Not worth the wait.

Samsung is criticized for packing too many useless, half-baked features in the TouchWiz. Galaxy S4 is the milestone of how a phone can be bloated with useless features.

Although Galaxy S4 sold well thanks for Samsung’s deep pocket in marketing, customers started to lose confidence (and patience) on Galaxy phones.

Galaxy S5 is actually a great phone except the camera.  But consumers have the perception that Galaxy phones are lagging, bloated and plastic.

Samsung tried hard to re-brand its Galaxy S phones with “premium” materials, iPhone-like (with a bit HTC One elements) design, and a “new” TouchWiz.

If you are a long-term Samsung Galaxy phone user, you will notice the new TouchWiz is less bloated, but:

But this is a less sweet Lollipop. Samsung Galaxy S6 and Galaxy S6 edge gives owners a non-genuine Android Lollipop.

Here are just a few examples:

If you want to try “genuine” Android Lollipop, you ma consider Nexus 6 or Moto X, or even Moto G.

Samsung Galaxy S6 defects #6: too many options = you cannot get what you want

If we consider the 3-color (more is on the way) options. So, you may have 18 options (3 colors* 3 storage size *2 variants) for your Galaxy S6 purchase.

It sounds great. iPhone has been very successful in similar configurations.

But Samsung is NOT Apple. Apple has a tight control of the distribution channel.

In some regions, Samsung still relies on distributors who definitely have no interest to carry 18 inventories for one product. So, it is not strange, some buyers actual have only one or two options.

What do you think about the Samsung Galaxy S6 defects?

Please leave your comments and thoughts in the comment box below.