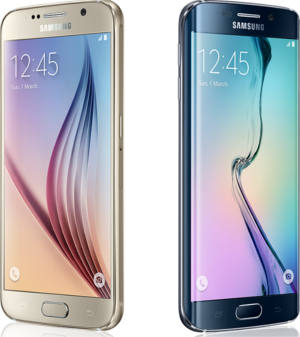 Once you decide to upgrade your phone to Galaxy S6 (from Galaxy S5? or Galaxy S4?), the first question you will face is Galaxy S6 or Galaxy S6 edge.

Should you pay additional $100 for Galaxy S6 edge?

This buyer guide will show you Galaxy S6 vs Galaxy S6 edge and help you decide which one is for you.

Although Galaxy S6 edge has a slightly larger battery, the difference is marginal (2600mAh vs 2550mAh, less than 2% difference).

In other words, anything between the screen and the back cover is almost identical for Galaxy S6 and Galaxy S6 edge.

If someone tells you Galaxy S6 edge has better hardware or software, he is wrong.

For example, some reviewers “feel” the camera in  Galaxy S6 edge can take better photos. This is very likely a delusion. If you take two pictures with S6 edge under same conditions with identical settings, some reviewers may still tell you one is taken with a better camera.

Always take reviews with a pinch of salt.

Edge screen in Galaxy S6 edge has really limited function. This is both good and bad.

Samsung first tried the edge screen in Galaxy Note 4 edge.  The reception is mixed. Some embrace additional features from the edge screen. While others are not impressed with these gimmicks in the tiny and isolated edge screen.

Apparently Samsung got this message.

In Galaxy S6 and Galaxy S6 edge, the bloatware was reduced significantly. Most useless or half-baked S features were removed from the new TouchWiz.

Although some old Galaxy owners may feel the simplification was overdone (see this post on the defects of Galaxy S6), most owners agree that Samsung is moving towards a right direction.

Another improvement on edge screen is  you can use either left side or right side as edge screen. Left-handed owners will not complain about the location of edge screen as that  in Note 4 Edge.

That’s all.  For the usage of edge screen, please check this post.

So, edge screen is an important design element in Galaxy S6 edge.  The wraparound screen with the glass-metal design simply makes Galaxy S6 edge the best-looking (or the ugliest for others probably) smartphone you can buy in 2015.

While the rounded glass on the left and right sides form symmetrical ridges for Galaxy S6 edge. It looks like a flattened water droplet on the glass.

Galaxy S6 or Galaxy S6 edge? It depends on your taste, and your wallet.

The additional $100 you have to pay for Galaxy S6 edge is mainly for the better looking. It won’t add $100-worth features.

If you are not impressed with the curved edge, the conventional Galaxy S6 is for you.

If you are on a tight budget, you may sacrifice on the looking to get a Galaxy S6.  It does not make sense to stretch your budget just for looking.  BTW, Galaxy S6 looks also quite good.

What is your choice? Galaxy S6 or Galaxy S6 edge?

Please let us know your thoughts and questions on  Galaxy S6 vs Galaxy S6 edge in the comment box below.

You may check more Galaxy S6 buyer guide on this page.