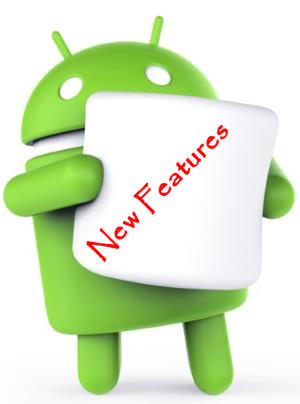 A week later on October 5 2015,  factory images for Nexus 5, Nexus 6, Nexus 9 and Nexus Player were released. A few days later, over the air (OTA) update to Android Marshmallow 6.0 was also available gradually.

Currently, only Nexus devices received the Android Marshmallow 6.0. All Android vendors are still testing it on their flagship devices.

Android Marshmallow 6.0 is a major update for Android Lollipop.

This page shares with you the top 12 new features in Android Marshmallow 6.0 for users.

1. Now on Tap: one of the best new features in Android Marshmallow 6.0 brings Google Now everywhere

Google Now is one of the most useful products from Google. It delivers the right information at just the right time. You can also use Google Now as your virtual assistant.

For Nexus devices owners, or Google Now launcher users, you should be really excited that the you can access Google Now on any pages, in addition to the dedicated home screen panel.

It works on any pages, any apps.

You may wonder this is not new because you can access Google Now by swiping upwards from the home button.

But Now on Tap is fundamentally different.

In the previous versions, what you accessed is the “generic” version of Google Now for your account. The information and suggestions you get have nothing to do with the contents of current page.

Now on Tap is context sensitive. It actually reads your screen and the information presented is related to current page.

Now on Tap uses Google’s Knowledge Graph to find relevant information and answers you may have related to the specific page and specifically for you.

For example, if you launch Now on Tap when reading a review of a restaurant, you may presented with the booking link or number which may be not presented in the page. You can make calls to book just by a single tap.

We will release a detailed guide on how to use Now on Tap in Android Marshmallow 6.0.

2. Doze in Android Marshmallow 6.0: your battery will work smarter, and longer

Doze is one of the most important new features in Android Marshmallow 6.0 to give you longer standby time for your device.

You can imagine doze is just an intelligent battery management system that lets you phone or tablet sleep automatically when you are not using them. It is triggered when the device is not in use for sufficient long time and the device is not moving for a period of time.

Of course, there are a few other criteria to trigger doze in Android Marshmallow 6.0.

The battery usage results can be significant, especially when the device is not used for extended period (e.g., when you are sleeping). For example, for [easyazon_link identifier=”B00M6UC5B4″ locale=”US” tag=”ggoandroid-20″]Nexus 9 [/easyazon_link] (WiFi only version), the doze feature can double the standby time of the tablet.

Please note, doze feature in  Android Marshmallow 6.0 does not affect your phone usage. For example, when someone calls you, it will ring immediately depends on your notification modes.

This new feature in Android Marshmallow 6.0 is always enabled. There are no settings for it. Vendors are not allowed to modify this feature, although they can add their own battery saving settings and algorithms.

You may not know your apps may be still “active”when you “close” the app. It may still periodically check network status, sync with the server, or push notifications.

These apps do not enter deep sleep state when you exit.

Some of these apps are designed to work in this way, for example, your Email app have to sync with mail server if sync or push notification is on.

Some are due to software bugs, or misuse (abuse).

Android Marshmallow now can force these apps to enter deep sleep state if you have not used them for a while.

This is called app standby. It is one of a few new features in Android Marshmallow 6.0 to help you reduce battery drain.

The outcome of App standby in Android Marshmallow is very similar to that of Greenify app.

Permissions and privacy are often overstated or even misled by some reports or blogs.  But nobody can deny that more and more Android users may concern about their “private” data or privacy.

To address such concerns, one of the totally new features in Android Marshmallow is to let the user to fully control app permissions. You can grant the permissions when you use the app.

Permissions for individual apps can be checked in the settings menu. You can also view app permissions by permission types.

Please note, if you upgrade your device from Lollipop to Marshmallow, existing apps will keep existing permissions and you will not notice this change when using these apps.  But you can check and change the app permission settings as newly-installed apps.

Backup in Android is always vague. Most users are not aware that Google only backs up some settings (e.g., WiFi info), not app data, until Android Lollipop.  Most users use third-party apps to backup app data, e.g., using Helium.

But in Android Lollipop, the app data backup does not work as expected.  A lot of app data are not backed up to Google servers even you enable the backup.

In Android Marshmallow, Google finally solved this issue. Now, when you restore the apps, you will be very likely get the app data reloaded properly.

Google should be definitely the center part of Android, although anyone can modify and release their own Andoid (e.g., Amazon’s Fire OS).

In Android Marshmallow, Google settings are now given a dedicated entry under the settings menu, at least on Nexus devices.

This makes sense for most Android users. You can change most Google related settings in a centralized location easily without fiddling around the Google Settings app.

It looks like a minor feature: maybe it is just a shortcut to Google Settings app.

But it is clear Google wants to offer better Google experiences, no matter you like it or not.

One of another Google new features in Android Marshmallow 6.0 is the smart lock for passwords.

But smart lock for passwords is not for you to unlock the phone. It is actually a password manager.

You can save your passwords for apps and websites  to your Google account. It will very likely be one of the most welcomed new features in Android Marshmallow 6.0.

In Android Marshmallow, when you select text, a localized floating menu will help you to select whole word, select all, copy the selection, past or share.

The selection floating menu also is context sensitive. For example,  it may offer translation if Google Translate is installed.

But some vendors (for example, Samsung) may block this feature with their old menu (with hard-to-understand icons).

Now, in Android Marshmallow, the quick settings menu is simply even better.

In addition to toggling on/off a feature in Android Lollipop, you can even select some profiles, e.g., Bluetooth devices, WiFi networks.

Please check this detailed guide (coming soon….) on how to use System UI Tuner to customize your Android Marshmallow.

In previous versions of Android, when you try to open a link in an app, you may be asked again and again to choose an app to do it if more than one app is registered for that type of link.

Settings a default app is NOT a good solution.

For example, if you set Chrome as default app for opening websites, and you want to open an Amazon link, Chrome will be used. But the better choice is Amazon app if it is installed.

Basically app links feature in Android Marshmallow automatically uses the most appropriate app to open all types of links inside an app.  For example, by default, YouTube link will be opened by YouTube app, instead of a browser.

You can also customize the app links for all apps.

SD card slot is not available in most Nexus devices.  And Android KitKat 4.4 even created some minor problems for some apps using SD card due to permission enforcement.

Some claimed micro SD card will be dead in Android.

This is definitely wrong. Some vendors, for example, Samsung, also made big mistakes by removing SD card in the high-end smartphones in 2015 (for example, in Galaxy S6, Galaxy Note 5).

One of the prominent new features in Android Marshmallow 6.o is better support for micro SD card.

You can even use the SD card as internal storage.

Android Marshmallow 6.0 allows you to format micro SD card can be formatted to a specific device and be treated as another part of internal storage by the Android system.

Android One users and many low-storage device (e.g., Moto E and Moto G) owners will welcome this feature.

Android Pay is a of touchless payment systems through NFC. It also works nicely with fingerprint scanners.

Although Samsung is still pushing for its own Samsung Pay, and Apple for Apple Pay, Android Pay should have a very bright future.

Of course, there are many other new features and improvements in Android Marshmallow 6.0.

If you have any questions on new features in Android Marshmallow 6.0, please let us know in the comment box below.