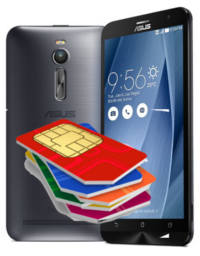 There are many wrong or misleading blog posts and reviews on dual SIM Android phones!!

So, I prepared this guide to help you understand what’s the difference between dual standby and dual active phones and how to choose dual SIM android phones to meet your needs.

What are dual SIM Android phones? Who need them?

Most mobile phones (including the dumb phones) require a SIM (subscriber identification module) card to connect to carrier’s mobile network.

All mobile networks based on GSM technology (which has about 90% market share) require an SIM card to identify the user.

By default, a mobile phone uses one SIM card. This is sufficient for most users.

But for some users who need a business number and a separate personal number, they may want to use 2 or more SIM cards in one phone, instead of carrying two or more phones.

So, for long time, mobile phone manufacturers have developed multi SIM (dual SIM, triple SIM or even quad SIM) phones for these users.

Nowadays, in addition to business users,  more users may want to use one SIM card for mobile data and the other one for voice. Many travelers may also want to take advantage of a local SIM card together with a home SIM card.

Anyway, dual SIM phones are NOT new things. Such phones were offered even before Android.

But not all dual SIM Android phones were created equal.

The difference is NOT small.

Dual standby means both SIM cards can connect (listen) to their own mobile networks. These two SIM cards in the same phone can even be from one carrier. In this case, both are connected to the same mobile network independently, just like from two different phones.

For dual active Android phones, there are usually two sets of receivers. Each SIM card uses its own receiver.

The difference between dual standby and dual active phones is significant when one of the SIM card is engaged in a call or data connection through 2G network.

Because 2G voice calls uses circuit switched data connection. This means once the call is engaged, the SIM card will use the receiver exclusively. So, for dual standby phones, this means the other SIM card will lose mobile network connection (unregistered). If someone calls you to the number associated with the unregistered SIM card at this time, the call will be unreachable. Depending on your settings with your carrier (not your phone), you can choose to divert call to voicemail, or divert call to other numbers, or do not divert.

For dual active phones, this is not an issue because each SIM card uses its own receiver. When one SIM card is engaged in call, the other SIM card is still registered in its own carrier’s network and is reachable. In this case, if someone calls this number, depending on vendor’s software implementation, you usually will get a notification for an incoming call. You can choose to hold the call or even initiate a 3-party voice call (conference call).

So, the difference between dual standby and dual active dual SIM Android phones are:

When using 3G or 4G mobile data on one SIM card on a dual standby phone, the other SIM card will NOT be disabled. 3G and 4G LTE mobile data connection always uses packet switching, which does not require exclusive usage of the receiver. Although 2G (or 2.5G as named by some carriers) mobile data GPRS (General Packet Radio Service) and Edge (Enhanced Data Rates for GSM Evolution) actually are both packet based. But due to the implementation, exclusive use of the receiver is usually needed.

In recent years, many carriers have rolled out voLTE (voice over LTE). Some may marketed it as HD voice or crystal voice or something else. VoLTE uses 4G LTE mobile network for voice calls. This means the call, if implemented properly, does not require exclusive use of the receiver. It is similar to VoIP (voice over IP); but with different protocols. .

So, dual standby Android phones may work like dual active phones when you are engaged a voice call through voLTE.  In this case, if someone calls you in the other SIM card, you should get an incoming call notification as in a dual active Android phone.  But you cannot put any call on-hold or on-wait, even your carrier support these.

In dual active Android phones, normally you can put any call on-hold or on-wait. You can even initiate 3-party conference call if your carrier mobile network support it.

Anyway, you can follow this guide to make both SIM cards available at all times even when you are engaged in a call in one SIM card.

Why it is hard to get dual SIM  dual active Android phones?

Dual SIM Android phones can be a good choice for many consumers. But a lot of Android flagship phones in most regions support only single SIM card. Dual SIM phones usually are linked  to “cheap” phones.

In addition, the standby time of dual active phones will be reduced significantly (almost halved) given the same battery capacity. This sounds matters. But actually, it does MOT matter for most users. For example, Google Pixel XL phone has a standby time of 23 days.  Most users charge phones every day. So reducing the standby time to 12 days is not a big deal.

The real reason is that almost all carriers do not like (or even hate) dual SIM phones, or multiple SIM phones. In a lot of regions, most consumers are under 12-month or 24-month “contract”. And phone companies offer some forms of subsidies for phones.  For users who need two SIM cards, they are happier to sell them two phones and lock the user into two contracts.  If they offer high quality dual SIM phones, the customer may only sign one contract and buy a cheaper prepaid SIM card (maybe from other provider to get better coverage).

So, it is not strange that carriers relying on “contracted” customers resist dual or multiple SIM card phones. If the markets are dominated by such carriers, for example in US, most phones have only one SIM card slot. While the same phone in other market may support two SIM cards. For example, Galaxy S7 and Galaxy S7 edge have a SIM card+ SIMcard/micro SD card combo slot. In US market, it becomes a SIM+micro SD only.

For dual active Android phones, big players don’t want to build them. The additional cost of a few dollars on each phone will erode a few million dollars profit if the phone just sell 1 million units. FYI, new Galaxy S devices (since Galaxy S3) usually could easily sell 50-80 million units in that year when it was released. In addition, additional software maintenance may be needed.  For small Android phone manufactures, it is hard for them to swallow the cost without increasing the price.

Therefore, the reality is that it is hard to get decent dual active Android phones. But more and more phones will support two SIM cards (albeit dual standby only).

Most dual SIM Android phones announced after 2014 are dual standby only. This is due to the upstream component supply is more or less standardized in 2015.

The simple way to test whether the dual SIM Android phone is dual standby or dual active is to call each other in the phone.

Of course, you should check with the vendor on the official information.

There are mainly two types of dual SIM phones in the market: 4G+2G, or dual 4G.

4G+2G dual SIM phones can connect only one SIM card to 4G (or 3G) network. The other SIM card can only connect to 2G.  Usually, the SIM card slot does NOT matter. Most dual SIM Android phones allow you to specify and change them. For example, you can specify which SIM card is used for data in Moto devices (Moto G, Moto E, Moto X and Moto Z)

Dual 4G means both SIM card can connect to 4G (or 3G or 2G) network in standby mode.  This matters in some regions where 2G network has been or will be phased out. For most dual SIM dual standby 4G phones, when one SIM card connect to 4G (usually the card you assigned for mobile data), the other card will connect to 3G voice (UMTS).

If your carrier does not support 2G, your 4G+2G dual SIM phone  then can only use one SIM card.

So, you should know whether you need to get dual 4G phones.

It is hard to get a dual active Android phones.

Here is a non-exhaustive list of dual active Android phones;

In 2017, up to now, there have been NO dual active Android phones released by major Android vendors.

Do you have any questions or comments on dual SIM Android phones?