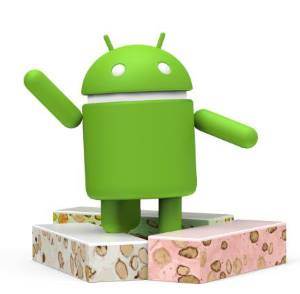 was officially released to public in August 22, 2016 for Nexus devices. LG V20 is the first phone released with Android Nougat 7.0.

#1. Vulkan API: one of the best Android Nougat 7.0 new features for game players

Many mobile game players should be excited about this new feature. More and more games will benefit from Vulkan API.

This means game players will get sharper graphics and fancy effects without slowing down the game. Of course, the actual performance gain depends on both hardware and app developers.

Split-screen mode (or multi window mode) is another most welcomed new feature in Android Nougat. You can run two apps side-by-side. You can also share contents between two apps.

For Samsung Android phone users, multi window was introduced since Galaxy Note II in 2012. And most of Samsung’s flagship phones later got this feature. But it only works on certain apps in Samsung phones.

In Android Nougat 7.0, Google finally added the split-screen mode in Android. This means all Android phones, once updated to Android Nougat, will have this feature.

Please follow this guide on how to use split-screen mode (multi window) in Android Nougat.

You can double tap the Overview button to switch between two most recently used apps.

This is one of the most useful Android Nougat 7.0 new features for many users. For example you may want to search some info when composing an email. Now, you can quickly switch between email app and browser app.

In many regions, mobile data are still quite expensive. Carriers tend to overprice mobile data because most smartphone users need them

In Android Nougat 7.0,  a new data saver option was added to help you reduce the usage of mobile data.

Once enabled,  Data saver will block background cellular data usage unless the app is actively being used. You can enable background mobile data usage for individual apps as exceptions.

For more detailed, please check How to use data saver in Android Nougat page.

Most Android manufactures, for example, Samsung, allow you to set wallpapers for home screen and lock screen separately.  Samsung even allows you to set S View window wallpaper separately in Galaxy S7 and S7 edge.

But for stock Android, prior to Android Nougat 7.0, home screen and lock screen always use the identical wallpaper. There are no separate settings for them.

In Android Nougat 7.0,  you can now have different wallpapers on your phone’s home screen and lock screen.

Anyway, this is a new feature for some users in Android Nougat.

Also, because Daydream is branded as VR feature (and A VR headset), the old Daydream now is just renamed as screen saver.

Doze is a nice feature introduced in Android Marshmallow. It can help your phone save battery.

In Android Nougat, doze becomes smarter. It can put your phone into lower power usage state when you’re on the move.

To reveal the rest of your alerts for that particular app, simply slide down on the respective notification.

This Android Nougat 7.0 new feature is very useful if you have lots of notifications from same app, e.g., Facebook, Twitter.

Samsung also tried this bundled notifications in Galaxy Note 7 (with Marshmallow). But you cannot turn it off.

Direct reply in Android Nougat 7.0 lets you quickly reply to a message, directly from within the notification shade.  So, you no longer need to launch the app to write a quick response.

Direct reply is not limited to messaging app. It also works with other apps depending on the implementation of app developers.

Although it is not necessary to reboot Android phones often, you may have to do it when you find the phone is less responsive or after a major update.

The No. 1 complaint for Android rebooting is that it takes too long time.

Now, in Android Nougat, the most annoying  screen of Android is optimizing apps is gone. Direct boot will  make the rebooting process faster and prioritize some apps.

Before you are directed to lock screen and put in your password, you’ll be able to get important text message and hear your alarm clock ring.

In Android Nougat, OS updates  will be downloaded and processed in the background when you are using the phone.

You will get a notification once the udpate is ready. You can then reboot the phone and use the new OS without “upgrading” process hanging on the screen.

The optimizing apps or upgrading apps screen will also disappear because most jobs were finished in the background before rebooting.

In Samsung phones, this is usually named as quick setting buttons as explained in this page.

Anyway, immediately below the stats bar, you can now find a new quick settings bar. You can access all quick setting tiles by tapping the arrow down button from notification shade directly.

Please check this guide on how to customize the quick settings panel in Android Nougat.

What’s your though on Android Nougat 7.0 new features?

Please note, this is a owner-help-owner community. If you need official technical support or have warranty/sales related questions, please contact the vendor directly.