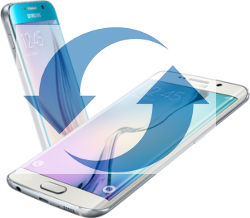 Samsung started to roll out Galaxy S6 Android Lollipop 5.1 update in US and a few European countries.

Although Android Lollipop 5.1 is not a major update to Lollipop 5.0, in addition to some under-the-hood improvements,  we find some nice new features you should try.

Here are the  top 6 new features you should try in Galaxy S6 Android Lollipop 5.1 update.

As mentioned in the top 6 defects of Galaxy S6, the new TouchWiz simply removed many useful features. Many Galaxy S6 and S6 edge owners are not happy with this.

Once of the removed feature is app sorting in Galaxy S6 Apps screen (app drawer). If you read the comments of that page, you can find many S6 owners, especially long-term Galaxy phone users,  are frustrated with this missing feature.

In the Galaxy S6 Android Lollipop 5.1 update, Samsung finally brought back this old feature. So, now you can sort apps in alphabet order.

Of course, you can also organize apps in Apps screen by creating app folders as detailed in this guide.

S Finder and Quick connect are quite useful if you get used to them. This is probably why Samsung put them in the premium location (notification panel)  in Galaxy S6  (actually in previous Galaxy devices as well, for example, in Galaxy Note 4, and Galaxy S5) and made them irremovable.

But not all Galaxy S6 owners like them. They want to remove S Finder and Quick Connect from notification panel.

Of course, they cannot. And they complained.

Galaxy S6 battery life is usually in par with Galaxy S5, although galaxy S6 and S6 edge has fore more pixels in display and faster CPUs.

But battery drain is always a problem for all Android devices.  Galaxy S6 fast charging may alleviate the problem a bit.

Most of the battery drain actually is caused by third-party apps running in background.

In Galaxy S6, abnormal battery usage can be reported in  Settings—Battery.

Now, Samsung moved a step further.  In Galaxy S6 Android Lollipop 5.1 update, you can auto stop background apps. If the selected app runs more than 10 mins in background, Galaxy S6 will close it nicely. The app will not be able to auto-restart.

Of course, you can start the app if you want to run it again.

RAW image file allows you to re-process the photo. This is surely not for ordinary Galaxy S6 owners because most of the owners seldom work with RAW files.

But as some Galaxy S6 owners are planning to partially replace heavy DSLR with Galaxy S6 camera, RAW file format support can be a deal maker.

You have to use third-party camera apps to get the RAW image file support. You may try Camera 360 or Google Camera.

Please note, RAW image files take more spaces. If you don’r have the tools to edit RAW files, just use normal format to save storage.

You can adjust the exposure levels by dragging your finger up and down on the screen. This sometimes can give you better photos, sometimes not.

If you need more control, you may try Pro mode, or use exposure lock.

The motion effect let the wallpaper move slightly when you tilt the device to left and right or to top and bottom.

You need enable this feature in wallpaper settings.

As discussed in the top 6 defects of Galaxy S6, Samsung removed some Lollipop features in Galaxy S6 and S6 edge for unknown reasons.

Galaxy S6 Android Lollipop 5.1 update did not bring any of them back.  These missing Lollipop features include:

Have you tried Galaxy S6 Android Lollipop 5.1 update on S6 and S6 edge? What’s you opinion on this update?

Please let us know your comments and thoughts in the comment box below.