There are at least 5 methods to take screenshots on Galaxy S9 and S9+ without using any apps:  hardware buttons (power+volume down), palm swipe, the assistant menu, Bixby voice command and Google Assistant.

Why do you need to take screenshots on Galaxy S9 and S9+?

Sometimes, you may need to keep a record of a conversation, to share a webpage, to show some locations on Google maps to others, or to record some transactions when you are using the Galaxy S9 or S9+.

A screenshot is the easiest and the most effective way to keep info and pieces of evidence. The image saved can be read on almost any devices.

Although you can edit them after you take screenshots on Galaxy S9 and S9+, most people give more trust in screenshots than the text you typed.

Sometimes, if you want to report a problem of an app, or request technical services, you may be asked to take some screenshots so that the technical staffs can understand the problem quickly.

There are at least 5 ways to take screenshots on Galaxy S9 and S9+ without using any apps:

This guide will show you the details of these 5 methods in the following sections individually.

Method 1: use hardware buttons to take screenshots on Galaxy S9 and S9+

You can take a screenshot on Galaxy S9 and S9+ by pressing the holding  Power button and Volume down button simultaneously, as illustrated below. You should hear a click /shutter sound once screenshot is taken.

This method works on almost all Android phones.

In old Samsung phones with a physical Home button, the physical home button was used with the power button to take screenshots. But this does NOT work on Galaxy S9 and S9+ because the Home button on S9 and S9+ is considered as a software-based button.

The key point of using physical buttons to take screenshots is to press the two buttons simultaneously.

As a human, we always press one button earlier than … Read the rest

You can easily disable Bixby button in Galaxy S9 and S9+ if you frequently pressed the button inadvertently, or if you do not want to use Bixby.

Update: After updating Galaxy S9 or S9+ to Android Pie, you cannot disable the Bixby button. Instead, you can remap the Bixby button to any third-party apps or any Bixby quick commands.

Since Galaxy S8 (and S8+), Samsung added a dedicated button for Bixby with the hope of boosting the usage of Samsung’s AI assistant.

As shown in Galaxy S9 and S9+ layout, Bixby button is located on the left side of the phone below the volume keys.

Samsung does not allow you to map the Bixby button on Galaxy S9 and S9+ to any other apps. It can only be used for Samsung Bixby unless you root the phone and mess up a few system settings.

Although Samsung Bixby has been dramatically improved since the initial release with Galaxy S8, in many aspects, it is still not comparable to Google Assistant, which can be enabled in Galaxy S9 or S9 by long tapping  (tap and hold) the Home button. Some Galaxy S9 and S9+ owners may not want to use Samsung’s Bixby at all. They are happy with Google Assistant.

Some other owners may do not use either Google Assistant or Bixby. But they may press the Bixby button accidentally when they want to press the volume button or the power button.

Even some Bixby users may not want to use the Bixby Home, which comes out when you press the Bixby button. You can use other Bixby features without the button.

So, there are sizeable Galaxy S9 and S9+ owners who may want to disable … Read the rest

In addition to tapping the camera app icon, you can have several other ways to start Galaxy S9 camera app in S9 and S9+.

When you use the Galaxy S9 camera quick launch first time, it will remind you of this feature as shown below.

You can then keep it on or turn it off if you want. 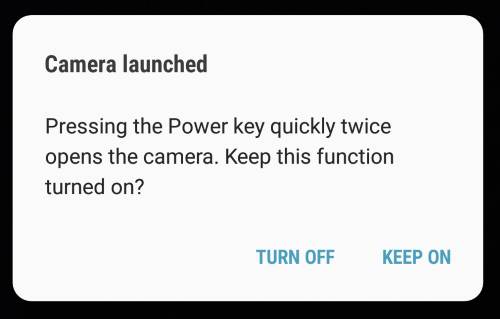 By default, in Galaxy S9 lock screen as shown below, there are two app shortcuts on the left and right sides of the bottom.

One is the phone app for you to make emergency calls without unlocking the phone. And the other is the camera app as shown below.

Of course, you can use other apps to replace them in Settings — Lock screen and security — App shortcuts.

You can tap the camera app icon to open Galaxy S9 camera app without unlocking the screen.

If you launch Galaxy S9 camera app without unlocking the screen, you can only access photos taken in this session. You cannot access any other photos or pictures saved in the phone before the screen was locked.

This is a security feature, not a bug. For example, if someone gets your phone, he/she … Read the rest