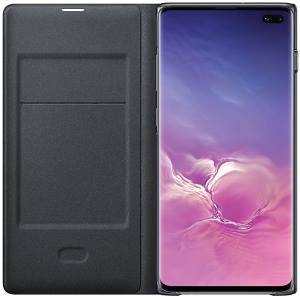 You can customize the LED notification icons on the front for individual contacts and apps.

Besides, the features of these two covers also differ in:

As shown below, the NFC antenna is located on the back (near center) of the cover. This matches the location of NFC antenna on Galaxy S10.

The LED icon area is located below the earpiece cutout and stretched up to the height of the Bixby button.

The wallet (pocket) is located inside the front part.

The top part of the Galaxy S10 LED Wallet cover is fully covered except the hole for the secondary microphone.

The Power button is also covered.

How to put on a Galaxy S10 LED View Cover (LED Wallet Cover)?

As illustrated below, when you try to put on the LED View cover to Galaxy S10, you should start from the top part.

Once you fit the phone into the top part of the cover, you can then snap the bottom part into the case.

You should put the Galaxy S10 LED View case on in this way because the top part of the case is fully covered and the bottom part has a large cutout.

When you want to take off the LED View case, you should do it in the reverse order, i.e., pull out the bottom part of the phone first.

Is the LED View Cover (LED Wallet Cover) recognized by the phone?

Galaxy S10 should recognize the LED View cover immediately after you snap the case to the phone.

For example, as shown in the screenshot below, you will get a notification from Galaxy Themes notifying you:

Congrats on the new case

This notification should appear whenever you reboot the phone or put on the case.

At the same time, in Galaxy S10 Apps screen, you should see a new LED icon editor app icon as shown below.

Of course, you can add the app to Galaxy S10 Home screen.

Besides, in Galaxy S10 Settings — Advanced features — Accessories, you should find the LED view cover if the cover is recognized by the phone.

Please note, you are NOT required to install any apps to use Galaxy S10 LED wallet cover.

Some knockoffs may ask you to install an APK file to make their “LED View” cover to work.  You should stay away from such covers.  You should only install apps from reliable and trusted sources.

How to customize LED icons for contacts and apps for the LED View Cover (LED Wallet Cover)?

You can customize the LED icons for individual contacts and apps so that you can know who is calling (or messaging) you and which app is pushing notifications without opening the cover.

The customization is done through LED icon editor, which can be accessed through the app icon in the Galaxy S10 Apps screen (or Home screen) as mentioned above or through Galaxy S10 Settings.

As shown in the screenshot below, on Galaxy S10 Settings, tap Advanced features. 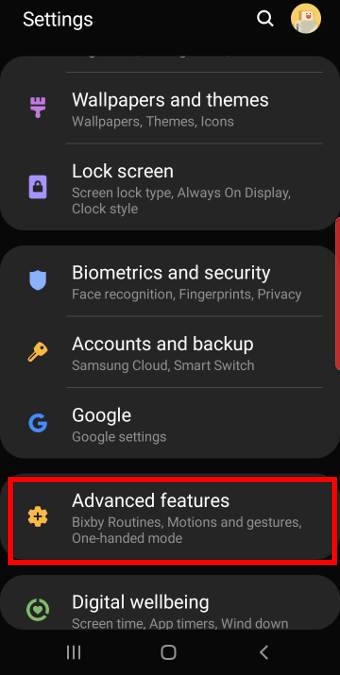 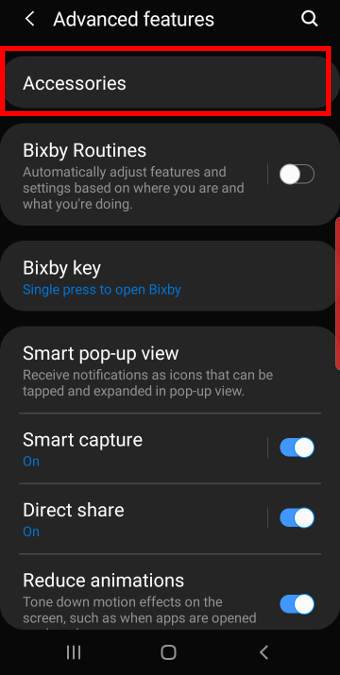 Tap Accessories in the Advanced features settings as shown above.

If you cannot see the entry of Accessories, it means the LED View case is not recognized by the phone. You may try to take the cover off, then snap on again.

Once the Galaxy LED Wallet cover is recognized by the phone, you can then see an entry of “LED View cover” under Accessories as shown in the screenshot below.

By default, the Automatic unlock is turned on. So, when you open the cover, the phone screen will wake up. If you do not set up a PIN or password or pattern to secure the phone (this is NOT recommended), then you will be directly brought to the Galaxy S10 Home screen.

It is recommended to use a PIN or password to secure Galaxy S10. In this case, if you open the LED View cover, you will get the Galaxy S10 lock screen, instead of the Home screen.

When you close the LED view cover, the phone screen will be turned off regardless of your Automatic unlock settings here.

If you want to assign LED icons for different contacts or apps, or want to create your own LED icons, tap LED icon editor as shown below. This is identical to tapping the LED icon editor on Galaxy S10 App screen. 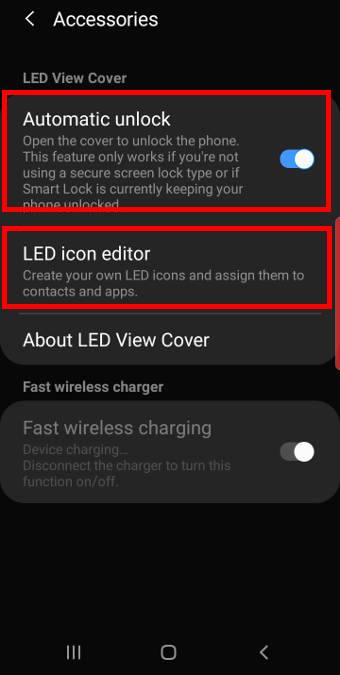 If you use the LED icon editor the first time, you will need to grant the permissions for the app:

Normally, it will also ask you to update the app when updates are available.  You should tap Update as shown above to proceed.

After opening the LED icon editor, you can see a list of preloaded LED icons as shown below. You can use them directly: assign it to one or more contacts/apps.

The number (0 in this example) indicates how many apps /contacts are using this LED icon.

You can also tap the + button to create your own LED icon. You can check all icons created by you under the Custom tab as shown below.

In this example, the list of custom LED icons os empty as shown above because we haven’t created any.

Tap the + button as shown in the screenshot above to create your own LED icons.

As shown below, you can tap any dots to make them active to compose a new LED icon.

Once you finish the design, you can give it a name as shown below.

You must tap Save to save the new LED icon, as shown below. Otherwise, the LED icon will be discarded. 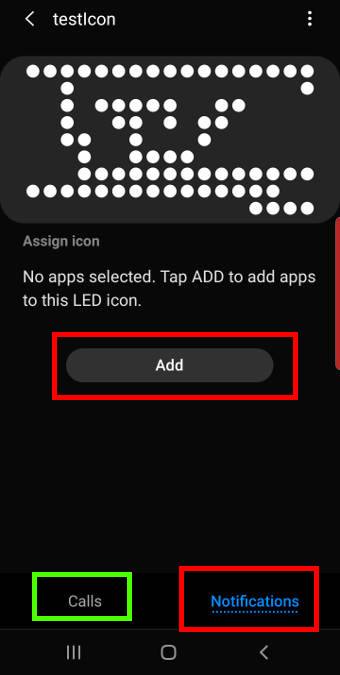 Once the new LED icon is created, you can assign it to any contacts (calls) or apps (notifications).

For example, you want to use this LED icon for notifications from Gmail.

Tap Notifications as shown above, then tap Add.

Now, the LED icon editor asks you to select an app for this icon.

Select Gmail as shown below. 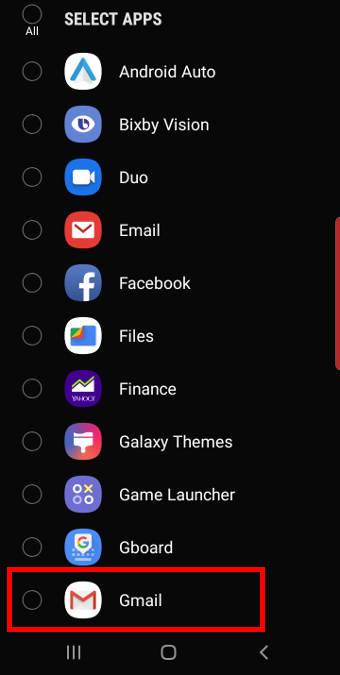 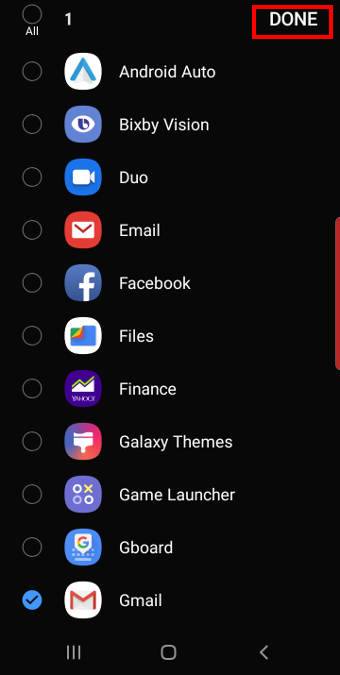 If you want, you can select multiple apps for one icon.

After selecting the app, you need to tap the Save button on the top right as shown above.

As shown below, now, the new LED icon is assigned to the Gmail app.

If there are any notifications from the Gmail app, you will see this icon on the Galaxy S10 LED View cover.

You can also manage this icon by tapping the menu button (3 vertical dots) on the top right as shown below. 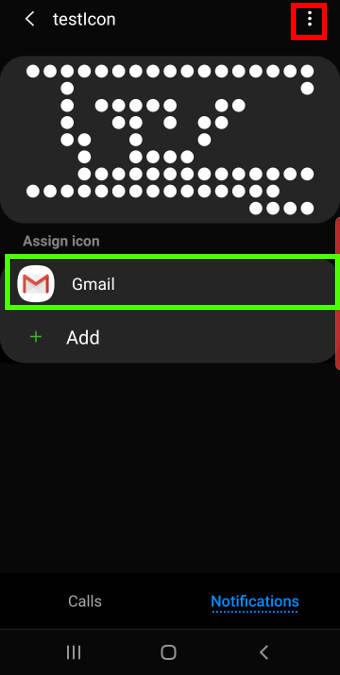 As shown in the screenshot above, you can:

Where is the color border in LED icons on the Galaxy S10 LED Wallet Cover?

On Galaxy S9 LED wallet,  you can add a color border on the bottom of the LED icon.

But Samsung removed this feature on Galaxy S10 LED Wallet cover.  So, there is no color border for any LED icons.

How to solve problems related to the LED View Cover?

Please note, the Galaxy S10 LED View cover does not require you to install anything. The cover should work immediately once you put it on the phone.

The two most frequently encountered problems with Galaxy S10 LED View cover are:

Although the Galaxy LED Wallet cover relies on NFC (it is powered by Galaxy S10 battery through NFC), it should work even if you turn off NFC on Galaxy S10.

Of course, if the case is still not recognized after reboot the phone, very likely, the chip on the cover was damaged, and you have to check with the seller or local Samsung service center to solve the issue.

For some owners, the Galaxy S10 LED View cover is recognized by the phone, but the LED icons do not work when notifications arrive.

Normally, as long as the LED View cover is recognized by Galaxy S10, the LED icons should work for the clock, calls, alarms, messages, and battery charging status.

In Galaxy S10 Settings, tap Apps, then tap the menu key (3 vertical dots on the top right) as shown below. 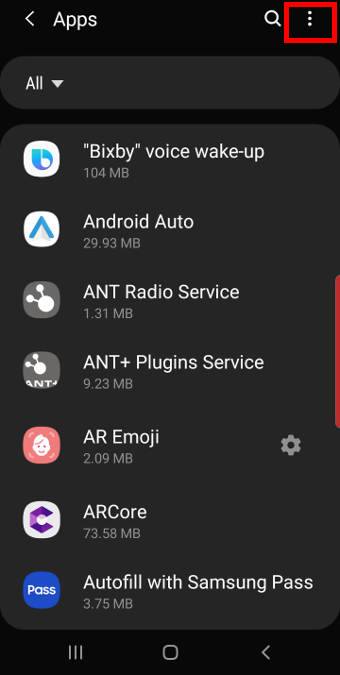 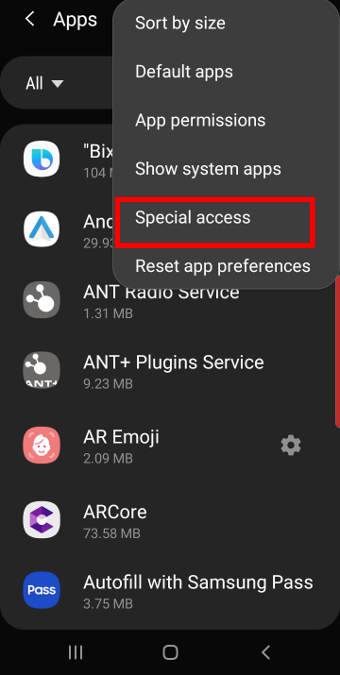 Tap Special access in the menu, as shown in the screenshot above. 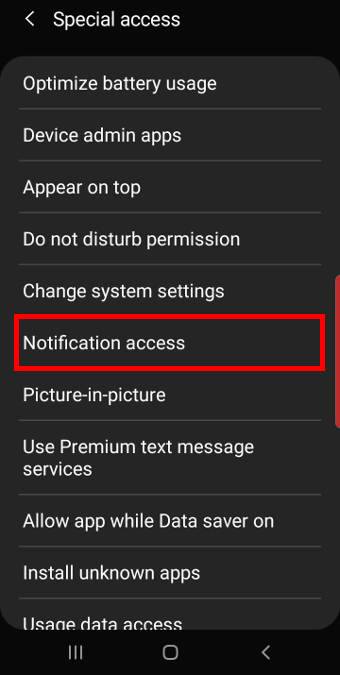 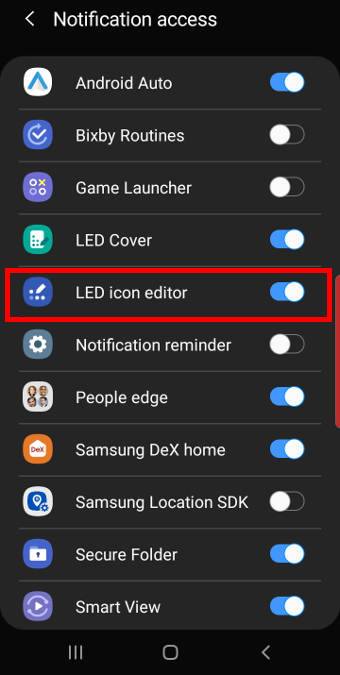 Now, in the notification access page, you need to make sure the LED icon editor is turned on.

The pros of Galaxy S10 LED View cover include:

Of course, the cover also suffers some drawbacks including:

If you prefer a back cover with some LED features, then the LED back cover is probably your option. If you want to use some S View features, you may consider the Galaxy S10 clear view (S View) cover.

Of course, in Galaxy S10 box, in most regions, you can find a clear back cover for you to start with.

If you have any questions on Samsung Galaxy S10 LED View cover for Galaxy S10, S10+, or S10e, please let us know in the comment box below.

The community will help you find the answer.

Also, do not forget to subscribe to our newsletter to get the latest update on Galaxy S10.