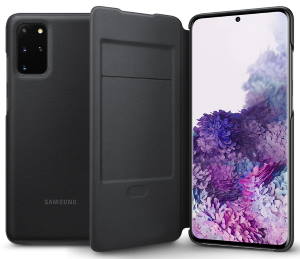 The LED View cover works identically on Galaxy S20, S20+, and S20 Ultra, although there are some differences among these three Galaxy S20 models. So, in this guide, Galaxy S20 refers to all of these 3 models.

LED View cover, which is a successor of LED Flip cover,  was first introduced with the Galaxy S7 and S7 edge. Samsung changed the design and materials over the years.

But the fundamentals are still the same.

All Samsung LED covers, including the old LED Flip cover, LED View cover (LED Wallet cover in some regions), and the LED back cover, work through NFC technology.

The communication between the phone and the cover does NOT rely on the NFC settings. It is hardcoded in the firmware. Even you turn off NFC on your phone,  the LED cover still works normally.

So, this is totally different from how S Pen on Galaxy Note devices works. S Pen does NOT use NFC.

The old S Pen (until Galaxy Note 8) does not have a battery. You do not need to charge it. These old S Pens get power from the screen (through electro-magnetic grid under the screen) when you use it.

Anyway, Galaxy S20 LED View cover works through NFC, but it does not depend on NFC settings on the phone. All notifications, call handling, music controls are hardcoded into the Galaxy S20 firmware.

What are the unique features of the Galaxy S20 LED View Cover (LED Wallet Cover)?

You can assign different  LED icons for individual contacts or apps. You can also create your own LED icons.

#2. Handle calls and control music playing from the LED icons without opening the cover

You can accept or reject calls by swiping on the notification icons.

You can also pause/resume media playing without opening the cover (read on).

#3. Credit card slot inside the cover

In some regions, the cover is named as Galaxy S20 LED Wallet cover for the card slot.

You can put a credit card or a transportation card in the slot. Of course, it is hard to insert 3 or more cards without damaging the slot.

As shown in the illustration below, the LED area  (marked as 1) has some LED dots, and you should not scratch this part too heavily when you clean the cover.

There is a notch (marked as 2) for the earpiece (top speaker, see Galaxy S20 layout). So, unlike previous generations of the LED View cover, there is no hole on the top of the cover. 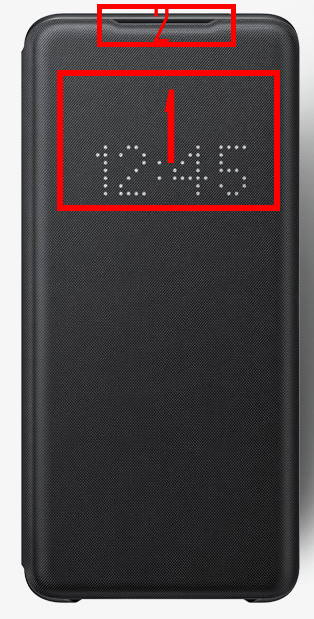 Once you open the cover, you can see the card slot (marked as 3), as shown below.

The card slot is designed for one card. You may squeeze two, but not more if you want. 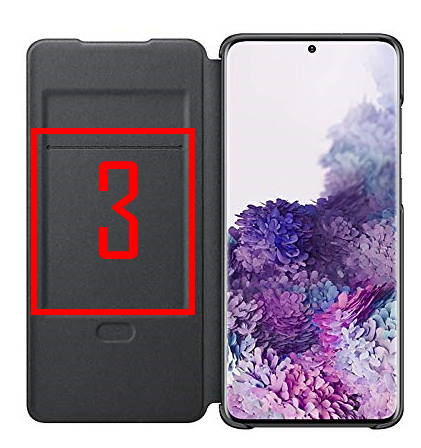 The NFC antenna is on the backside.  You should not worry about the exact location.

But inside, there is a sticker, as shown in the picture below. You should NOT remove it. Some metal parts are hidden below this sticker. 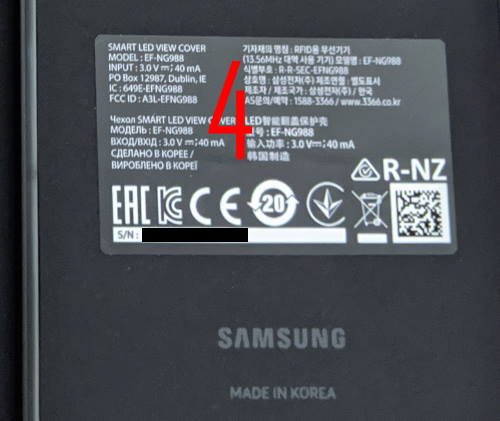 How to attach and remove Galaxy S20 LED View cover?

The top part of the Galaxy S20 LED View cover is covered with only one hole for the secondary microphone.  The bottom part is open.

So, when you attach the cover to Galaxy S20, you should attach the top part first (A). Then you can easily snap it on (B), as shown below 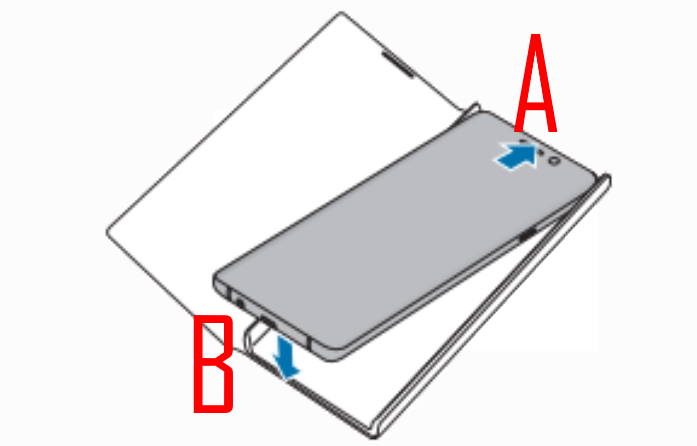 When removing the cover (for example, adding a micro SD card, or change SIM card), you need to reverse the sequence.

You should always release the bottom part first.  Otherwise, it is painful to remove the cover, and you may end up with a damaged cover.

How to accept and reject calls on Galaxy S20 LED View cover?

When you receive a call,  Galaxy S20 will ring or vibrate, and the LED icons on the LED cover will animate.

By default, the incoming phone number will also be displayed.

You can now pick up the call or reject the call on the Galaxy S20 LED View cover without opening it.

You need to use a bit of force to register the gesture because the cove is not as sensitive as the display. 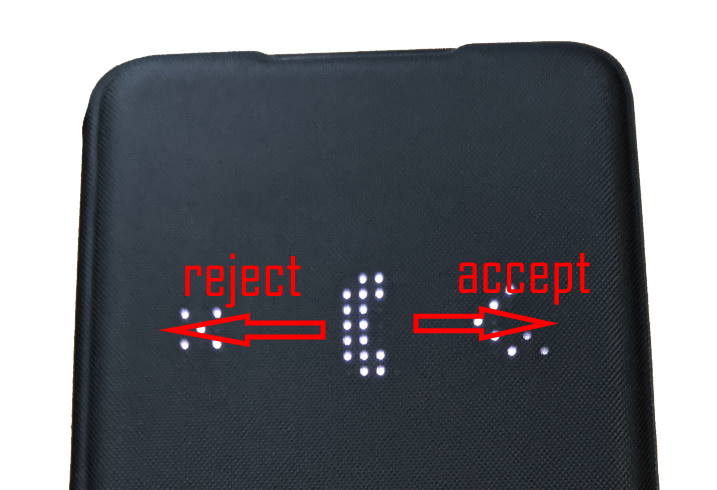 You can use similar gestures to dismiss or snooze an alarm.

When music is playing in the background, you can control it without opening the Galaxy S20 LED View cover.

You can press the Side key (power key, see Galaxy S20 layout) to call out the LED icons when the cover is closed, and music is playing.

As shown below, you will get three LED icons: 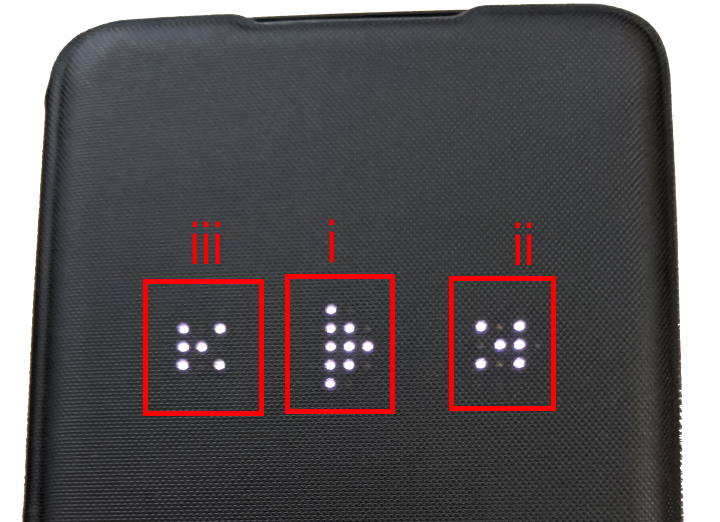 How to assign, customize and create LED icons on the Galaxy S20 LED View cover?

By default, when you get a call, the phone LED icon appears on the cover.  You may want to know who is calling you without waiting for the numbers to be displayed on the cover.

In this case, you can assign a distinct LED icon for some contacts. When these guys call you, the phone icon will be replaced by the LED icon you assigned to him/her.

So, you will know who is calling you by glimpsing on the LED icon.

The limitation is the assigned LED icon works for calls only, not SMS.

Similarly, you can also assign LED icons to some important apps so that you may know whether the notification is important without opening the cover.

You can access LED icon editor by tapping the app icon in the app drawer.

You can also go to Galaxy S20 Settings, tap Advanced features, as shown below.

As shown above, in the Advanced features page, tap Accessories.

Now, on the Accessories page, as shown below, you should find the  LED View cover.

If you cannot find the LED cover on this page, it means your cover is not recognized by the phone. You may try to remove it, then snap it again.

In fact, this is just a shortcut to the LED icon editor app.

The LED icons are grouped as Preloaded and Custom, as shown above.

The preloaded LED icons are created by Samsung. You can assign it to any contacts or any apps. But you cannot delete or modify the icon itself.

You can tap the + icon to create your own LED icons in a 23*9 (dots) canvas. The LED icons you created will be in the Custom group. You can delete or modify them at any time.

The usage of the two groups of the KED icons is identical.

For example, you want to assign the Family icon to some contacts and apps.

Tap the Family LED icon, as shown above.

Now,  in the Family LED icon page, there are two tabs:

By default, you are in the Calls tab, as shown below.

You can tap Add to assign this LED icon to one or more contacts.  When this contact calls you, you will see the Family LED icon, instead of the default Phone icon.

Of course, you can also assign the  LED icon to one or more apps.

Tap Notifications as shown above, then tap Add to choose one or more apps for this icon.

There is no limitation on the number of contacts or apps assigned to any LED icons. But you need to make it meaningful so that you can remember them.

Here are some questions you may have with your LED wallet cover and the answers.

NFC will be used automatically for the LED View case even if you turn off NFC on Galaxy S20.

Anyway, it is beyond your control once you attach the LED View cover to Galaxy S20.

A2: The battery consumption of Galaxy S20 LED view cover is very marginal.

You will not notice the difference in the SOTwith or without the LED case.

Q3: Why my Galaxy S20 does not recognize the LED View cover?

Q4: My Galaxy S20 LED View cover is recognized, but it does not show any notifications. Why?

Very likely, you did not grand the notification access permission for the  LED icon editor app.

Q5: When I close the cover, Galaxy S20 is locked instantly. Can I set a delay for screen lock after closing the case?

Yes, you can choose to lock the phone after up to 30 mins after closing the cover.

When you close the LED View Cover, my default, Galaxy 20 turns off the screen, and lock the screen instantly.  The screen lock action is a mimic of pressing the Side key.

So, you can turn off Lock instantly with Side key (under Galaxy S20 Settings — Lock screen — Secure lock settings). By default, it is enabled on Galaxy S20.

After disabling the lock instantly with Side key, Galaxy S20 should follow the timer set in Lock automatically after closing the LED View Cover.

As one of the official accessories for Galaxy S20, S20+, and S20 Ultra, the Galaxy Note S20 LED Wallet cover is worth your consideration if you need a full cover (not just back cover) to protect the phone body and the screen.

If you just need a back cover to improve the gripping, the free clear back cover in your Galaxy S20 box is sufficient.

Cons of the LED View cover

Anyway, Galaxy S20 LED View Cover (LED Wallet Cover) is one of our top choices for 2-piece covers/cases for Galaxy S20. If you want to get some LED icons features on a back cover, you may try Galaxy S20 LED back cover.

You may also consider Galaxy S20 Clear View Cover (S View Cover) if you want to use the S View Window on the cover.

Do you have any questions on the LED View (Wallet) Cover on Galaxy S20, S20+, and S20 Ultra? What’s your thought on the Galaxy S20 LED View cover?

If you have any questions or encounter any problems on the LED View (Wallet) Cover on Galaxy S20, S20+, and S20 Ultra, please let us know in the comment box below.

The community will help you get the answer.

You may also share your thoughts on this the LED cover in the comments.

If you have any questions on Galaxy S20, you may check other Galaxy S20 guides:

You can also join us on our  Facebook page.