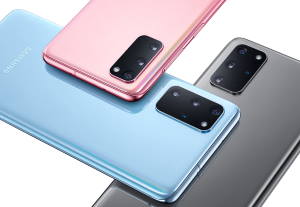 Samsung released 3 models of Galaxy S20. So what are the major differences among Galaxy S20, S20+, and S20 Ultra?

Please note, in some regions, the configuration options (RAM, storage, colour, 5G, LTE) may be limited. But software features are all identical in these three Galaxy S20 phones.

And all of the three phones support 120Hz refresh rate (at 1080p resolution) as explained in this page. FYI, most of the mainstream TVs, smartphones, PC monitors, laptop screens have a refresh rate of 60Hz.

But the size of the screen differs on these 3 phones:

In addition to the size, the curvature of the edge of the screen also differs noticeably among these 3 phones. Galaxy S20 screen is the flattest. Galaxy S20 Ultra has the sharpest curvature.

Among these 3 expensive Galaxy S20 models, Galaxy S20 Ultra is the most expensive starting at $1399 (with the base configuration).

This is a huge jump from the Galaxy S10 series.

Actually, Galaxy S20 is more expensive than the latest iPhone 11 Pro, which starts at $999 only.

Surely, this price is not sustainable.  If you feel Galaxy S20 is expensive now, do NOT buy. The price will drop, drop,  and drop within a few months.

iPhone 11 and overpriced-now-heavily-discounted Pixel 4  give you more value for your money and better performance.

But most of the outstanding camera features are in Galaxy S20 ultra only. You should not be misled by the advertisement and NOT assume all three models have identical or similar cameras.

In short, the rear cameras in Galaxy S20 are similar to those on last year’s Galaxy S10, with some minor updates.  Only Galaxy S20 Ultra has the features mentioned in the advertisement you read or watched.

The rear camera systems on these 3 phones all have tracking AF and OIS (optical imaging stabilization). Please note, OIS is not available for the ultra-wide-angle camera sensors on all of these three phones.

Compared to Galaxy S20, Galaxy S20+ only adds one additional camera on the back:

So, Galaxy S20+ rear camera is close to those on last year’s Galaxy Note 10+.

Galaxy S20 Ultra also has a quad-camera system. But the camera sensors are substantially different:

Please note, Samsung dropped the dual-aperture technology (which can be found on Galaxy S9, Galaxy Note 9, Galaxy S10, and Galaxy Note 10)  on all of the Galaxy S20 phones.

You may check this guide on the difference between the hybrid optical zoom and super-resolution zoom on Galaxy S20. This guide shows you how to use the Galaxy S20 camera lenses to zoom in and zoom out properly.

Actually, the front camera sensor on Galaxy S20 and S20+ is identical to that on Galaxy Note 10 and Note 10+.

Galaxy S20 ultra has an f/2.2 40MP front camera. The most impressive feature of the Galaxy S20 Ultra front camera is the Phase-Detection Autofocus (PDAF).

This means you can get better selfies in low-light conditions with Galaxy S20 Ultra.

The differences among Galaxy S20, S20+, and S20 Ultra also include the battery capacity.

The charging time for these 3 phones is very close.

The common colours of all 3 Galaxy S20 phones are Cosmic Grey and Cosmic Black.

Currently, Galaxy S20 Ultra only has these two colour options.

Galaxy S20 has one additional colour option of Cloud Pink, and Galaxy S20+ has Cloud Blue.

Undoubtedly, Samsung will bring more colour options in the future to get your attention when sales slump.

Galaxy S20 and S20+ have two RAM configurations depending on 5G or LTE version:

Galaxy S20 Ultra also has two RAM configurations depending on the storage size:

Anyway, the RAM size is not an issue for 99.99% owners. But Samsung made the simple thing complicated.

Due to dimensions and battery capacity,  the weight differences among Galaxy S10, S20+, and S20 Ultra are significant.

All of the 3 Galaxy S20 models support super-fast charging and fast wireless charging 2.0.  All come with a 25W USB-C wall charger in the box.

But Galaxy S20 Ultra can charge faster up to 45W. Of course, the actual charging speed is always lower than this.

For example, Galaxy Note 10+ also supports 45W super-fast charging. But based on our test, the charging time (using the official Samsung 45W charger) is similar (only 10 min faster) to using the 25W charger, as reported in this page.

If you have any questions on the differences among Galaxy S20, S20+, and S20 Ultra, please let us know in the comment box below.

You can also share your thoughts on the Galaxy S20, S20+, and S20 Ultra in the comments as well.